And as expected of an Aussie sport, it comes with its own dictionary of slang.

It’s a sport made for Aussies by Aussies. It’s adored nation wide and, slowly but surely, it’s working its way into the hearts of its newly acquired international fans. But what exactly is AFL?

AFL (Australian Football League) is also lovingly nicknamed Aussie Rules, or simply ‘footy’. It was started in the 1850s, with the first ever game being hosted in 1858. 150 years later, the game is still going strong, with 18 teams in the League. 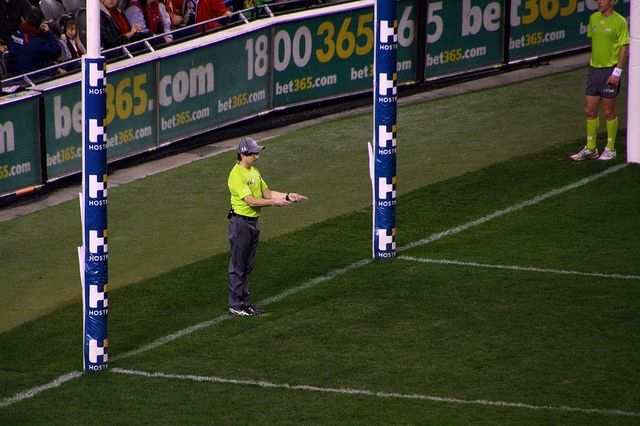 The season begins around late March and ends in late September. 23 ‘home and away’ games make up a season, as well as the four exciting rounds of finals games.  The ladder is based off a point system until the Top 8 teams hit the finals. From then on out, it’s do or die, until the remaining two teams are left to battle it out in the AFL Grand Final. Games are divided into four 20 minutes quarters, plus extra time. There are 22 players for each team: 18 on field, and 4 on the bench.

AFL fields are, admittedly, a little strange looking if you’re new to them. To begin with, it’s an oval field. To add to that, there a four goal posts at each end of the field, two of which are taller than the others. If the ball passes through the two taller posts, than it’s called a goal, which is worth 6 points. If the ball sails through one of the taller posts and one of the shorter posts, it’s called a behind, and is worth 1 point. At the end of the match, these points are tallied up to discover the overall winner. 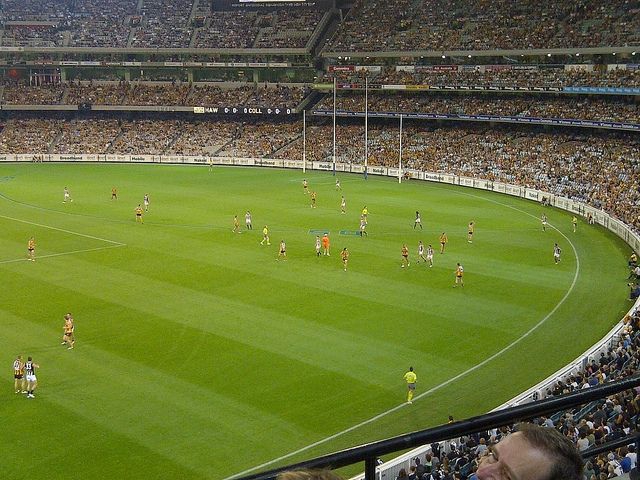 And as expected of an Aussie sport, it comes with its own dictionary of slang. We contacted some avid AFL fans and were taught the following:

Specky: slang for ‘spectacular mark’ where a player jumps up really high (often by using his opposition as a springboard) and catches the ball. Also known as a hangar.

Banana snap kick: …apparently this is what it is…

Chewy on your boot: a put off

Falcon: when a player is hit in the face by the ball

The pine: the bench

And plenty more. So if you’re visiting us here in Aus, be sure to buy tickets to see a game on the weekends. They’re hosted all over the country, including cities that don’t have their own home team. Better yet, if you’re visiting us here on the Coast, come watch the Gold Coast Suns play a home game at the Metricon! Experience the thrill of a jam-packed stadium, filled with roaring spectators decked in red and gold. 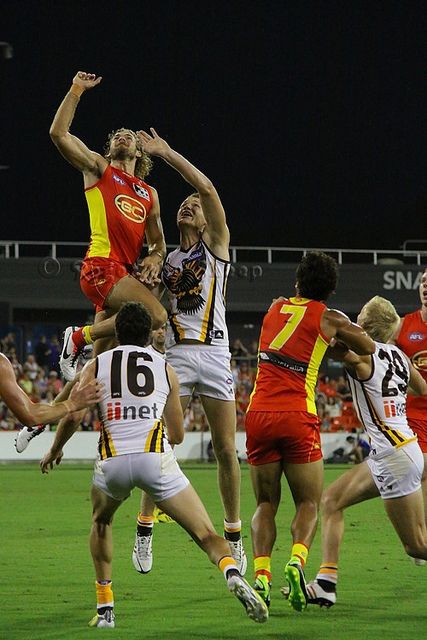 Photo credit to: Roger the Sheep

Either way, you’ll never look at sport the same once you’ve had a taste of the awesomeness that is Australia’s own: AFL.

Here's a glimpse of what you're in for!