Trust us: this will be the longest 150 seconds of your life.

Looking for something that will cause your stomach to skyrocket to your throat before plummeting to your feet and then back again? Searching for something that will leave you breathless, voiceless and witless, all in one? Aiming for that thrill, that high, that adrenaline rush? Then we suggest you hit up Dreamworld and try their Big 8 Thrill Rides!

Originally titled the Big 5 Thrill Rides, the collection has steadily grown over the years, and the opening of Pandamonium, the KungFu Panda themed attraction, has brought the tally up to eight. So while Movieworld is for movie-lovers, Seaworld is great if you’ve a few fishy friends, and Wet’n’Wild is wonderful on a hot day, Dreamworld is the place for thrill-seekers.

If you’ve a weak stomach, we suggest you don’t take on The Claw. The only ride of its kind in the Southern Hemisphere, The Claw is merciless as it swings you nine stories high, from positions ten to two o’clock, at 64km/h. And if that isn’t enough, the ride twists in 360 degree circles, from start to finish. Once you’re strapped in, there’s no escape from The Claw.

Visible from the motorway, Dreamworld’s Giant Drop is a heart-racing, scream-wrenching ride designed specifically for the brave. Standing at 120 metres tall, the ride was awarded the title of the world’s tallest free-falling ride by the Guinness Book of Records in 1999. As you’re slowly winched to the top, be sure to take in the amazing view - but don’t be fooled by it. Before you know it, you’ll be plummeting back to earth at the speed of gravity. That’s a 120 metre drop at up to 135 km/h. Good luck. 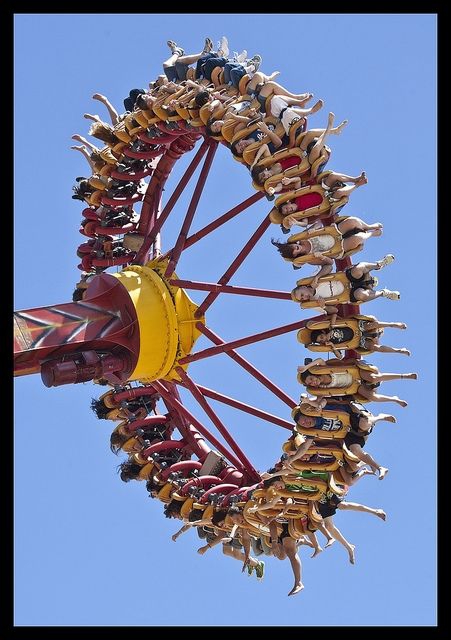 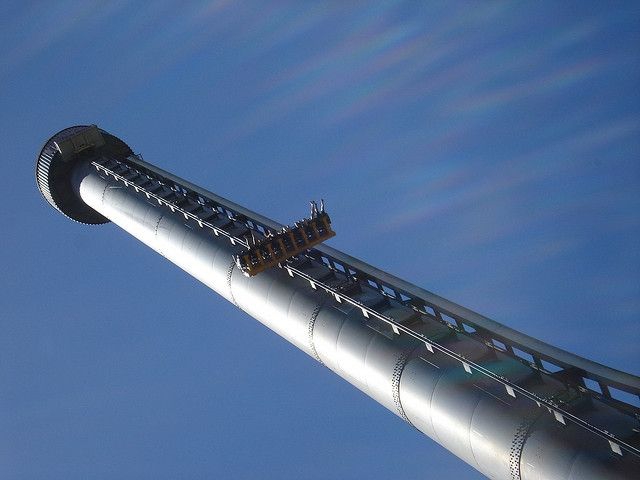 Built onto the same tower as the Giant Drop, the ride is the second instalment of the original Tower of Terror. The difference? You fall face first. Passengers are strapped into the car, and after a few eerily silent seconds, are rocketed backwards out of the 206m tunnel, hitting an incredulous speed of 161km/h. And after a few short seconds to catch your breath whilst dangling 100m high, you’re plummeted back to earth and through what suddenly seems an impossibly small re-entry tunnel. As though to make it worse, while you’re dangling 100m high in the air, you can see the plunge coming. Literally.

Though the setting is rather serene - golden sand, blue waves, old-fashioned change rooms - the ride is anything but. Dreamworld’s Wipeout is not a ride we suggest you try on a full stomach. The ride throws you into twists, turns, spirals, flips as you ride the wildest wave of your life. And just as you think it’s coming to an end, a second swell hits, throwing you upside down before dumping you back on shore. 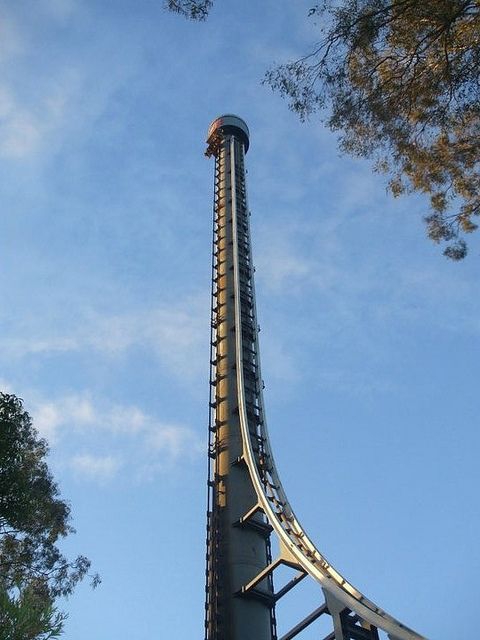 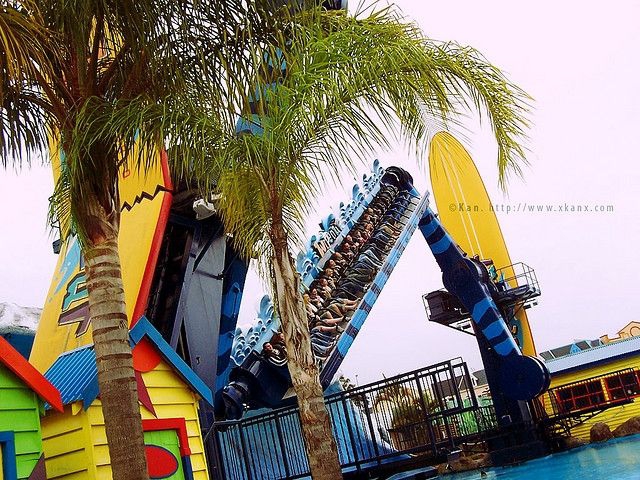 At first, The Cyclone seems rather pleasant as the train is gently hoisted 40m up the first incline. At the top, you can admire White Water World, the hypnotic swing of The Claw, and what is soon to become a thrilling descent. The first drop sends riders flying along the track of the tallest high-speed gravity rollercoaster in the Southern Hemisphere at up to 85 km/h. If that isn’t enough, towards the end of the ride passengers are thrown into a reverse sidewinder, followed by a vertical loop.

Dreamworld’s Mick Doohan’s Motocoaster is the only Motocoaster in the world to feature life-size replicas of 500cc racing bikes. Built low to the ground, the 605m track is made up of a total of 18 bends, banks and turns, and is comprised of 14 motorbikes and two sidecars for children and disabled guests. Riders are held in by a lower restraint system, so as the train carries you at 72km/h, you can experience an exhilarating feeling of freedom. 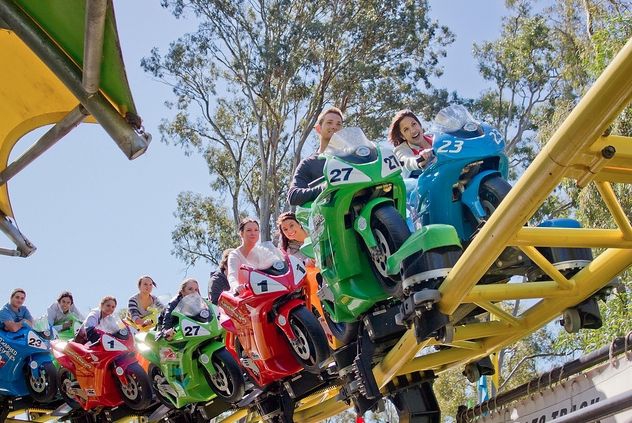 As the highest inversion ride in the Southern Hemisphere, the BuzzSaw is the first thrill ride visible - and audible - to guests as they arrive in the main car park. There’s little to cling to on this ride as you’re strapped in with a single waist harness in an open carriage. The ride starts with a 46m vertical ascent and once you reach its peak, you’ll really wish you were back on the ground. After being dangled upside-down 15 storeys high, the carriage then free-falls through a 360 degree heart-shaped roll, before plummeting down the final vertical drop at speeds up to 105km/h. And if that isn’t terrifying enough, wait until you hit the launch station again.

Opening just this summer, Pandamonium brings Dreamworld’s collection of Big Thrill Rides to eight in total. Now, when lining up for this ride, be sure to pick carefully between the two queues. If you’re hoping to hold onto your lunch, we suggest you pick the ‘not-so crazy’ line. However, even on the ride’s calm setting, you’ll be spun round and round while swinging side to side.

If you’re one of the many thrill-seekers who visit Dreamworld, then you’ll find the ‘seriously crazy’ queue is more suited to your taste. Not only will you be spun round and round and side to side, you’ll be thrown upside down and all of this at up to 3.8 G-forces. And if that isn’t enough for you, the ride soars eight metres high. Trust us: this will be the longest 150 seconds of your life.

So if you’re beginning to feel your life is that little bit too mundane and you’re looking for something to do, why not give Dreamworld’s Big 8 Thrill Rides a try? We suggest you pack a spare pair of underwear, plan out your meals appropriately and don’t schedule any presentations for the following week. 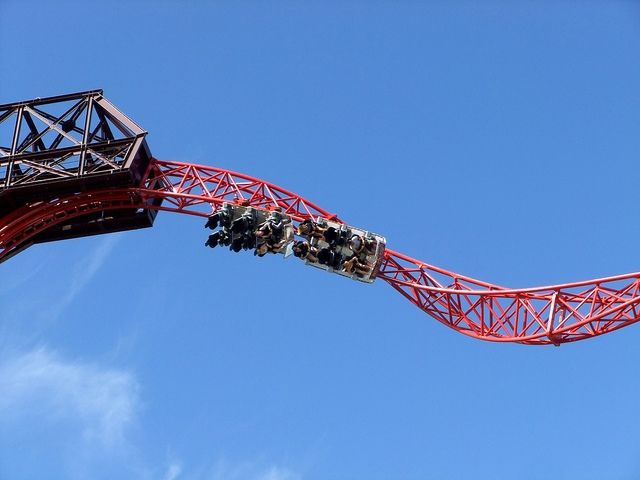